Serge got a call yesterday saying telling us that Finiyas was put in jail.
Finiyas?
He is the last of our former street kids that we would think of to be in jail.
What the heck for?
Story was he filled out a form at immigration for a  regional passport and got it filled incorrectly and they arrested him. We now know it wasn't immigration but local leadership that arrested him somehow.
He has three names and last time he used two and this time a different combination, and he got some places mixed up on the form.
What I know is this, the forms are complicated at best for anyone to fill out.
Finiyas is a guy who has worked hard since 2005 to improve his life. He was the first to get a 'real' job. The first to open a bank account. The first to rent his own home and live on his own. He was the first for many things ... but one thing he did not have was education.
I have wrestled for years that he is probably dyslexic and with little to no resource in the country to properly diagnosis him, life moves forward for him as it can. He did decide to go to a 'catch up' school this year in the evening, for which we are helping him to pay for. He is thoroughly enjoying it and seems to be making progress which he is thrilled about.
BUT... not enough obviously.
My heart breaks.
Last time he applied for this regional passport, someone helped him to fill it out. This time, I am sure he figured that his reading and writing had improved enough to do it on his own.
Clearly not.
I can't imagine how he's doing... what he's thinking...
God protect his spirit and his heart.
Serge worked the phone most of the day today, along with a  few other people, to try to sort through this mess. We haven't heard that he has been released yet. May it be sooner than later.
He was just being proactive in getting a region passport so that he would be ready to travel with his office team when the time came. They had been told they might be traveling to Burundi to see another branch office and he wanted to be ready.
He just wanted to be ready... he was being proactive ... he was doing what he thought he could do.
Oh God... give us and the people he works with, wisdom.
My heart breaks tonight. The world just isn't fair ...

Email ThisBlogThis!Share to TwitterShare to FacebookShare to Pinterest
Labels: Ponderings

View from my porch today

As I work from my upstairs office... this is the view.


I just have to smile that God can provide 'home' right in front of my house - in the city!
Not sure they're 'true type' Holsteins but they'll do.

Team life ... celebrating the birthday of Liz (here long-term with her husband Joel from Australia) and Aliza, an intern here for 2 months from Canada.
Got most of the team together plus a few extras to celebrate last night. 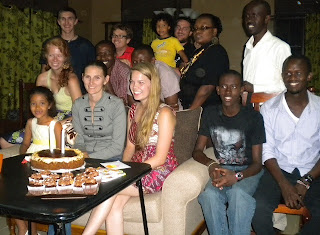 Posted by Rwanda momma at 15:18 No comments:

Email ThisBlogThis!Share to TwitterShare to FacebookShare to Pinterest
Labels: Ministry

Today... marks the 14th!!! yes FOURTEENTH Wedding, dowry or civil wedding we have been to in 6 weeks!!
Serge has been Best man twice, I have been Matron once, Isabella has been flower girl twice and I have done 7 wedding cakes.
Enough already!!
And that is all close family and friends not to mention the umpteen other invitations we received and didn't even consider!
Today was the civil wedding for Solange, our former house girl.
Who knew when she showed up at our gate about 5.5 years ago that we would be at her wedding today.
She came with no experience  but we quickly grew to love her in many ways.
We journeyed with her through an abusive relationship, encouraging her time and time again to leave ... so glad she finally found the strength to do that but what a journey it was.
And today, she civilly married a good Christian man - as she says. He's younger than she is but she says he loves her and will do her and her son good.
Serge and I met him, D'amour, today for the first time. He was so warm and appreciative to us. We are blessed. I gave him a stern, big sister warning that if he ever did Solange wrong, he'd have us to deal with! :-)
One never knows when you allow someone into your life, where the journey of life will take you together and how you will impact the lives of each other - no matter what the social class, race, etc. 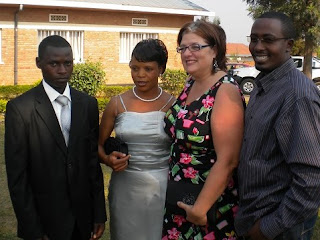 We have another wedding on Saturday... then believe it or not.. no more weddings until July 27th - Solanges!
Posted by Rwanda momma at 15:03 No comments:

Email ThisBlogThis!Share to TwitterShare to FacebookShare to Pinterest
Labels: Life in Rwanda 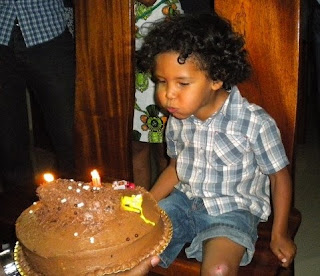 My little, growing up family... 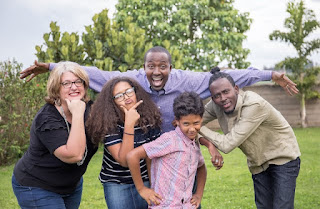 Rwanda momma
Daughter, wife, mom.... from a dairy farm to the heart of Africa. God does have a sense of humour and that's good! Life is full of the unexpected ... and hopefully this blog will help me 'release' some of what comes my way Why Rwanda Momma... feel like that most days, more than my own kids call me mom...